“It Is The Brain’s Preferred State Of Being”

In 2012, the Harvard Business Review released one of their Daily Stats, stating that “regular participation in clubs and other social activities increases happiness to same degree as doubling one’s income.” 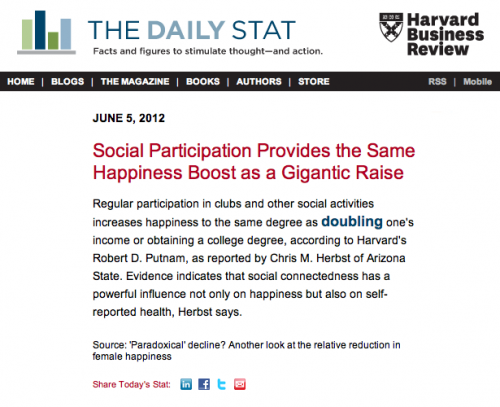 The statement came from Robert D. Putnam, author of Bowling Alone: The Collapse and Revival of American Community, and it’s pretty mind-blowing… So we’ll let that sink in for a minute before continuing. *wink*

If Putnam’s assertion surprises you, if you had no idea how important social interaction is to humans, hold onto your hat — because we’ve got more to share!

Harvard University-trained Matthew D. Lieberman is a professor in the Departments of Psychology, Psychiatry, and Biobehavioral Sciences at the University of California, Los Angeles and the founding editor of the journal Social Cognitive and Affective Neuroscience. As one of the foremost authorities in the world on the study of social neuroscience, he was awarded the Distinguished Scientific Award for an Early Career Contribution to Psychology by the American Psychological Association in 2007. Simply put: Lieberman’s The Man when it comes to the study of just how social our brains are.

Yes, our brains are decidedly social.

In 2013, Lieberman authored Social: Why Our Brains Are Wired to Connect, a book which reveals just how our need to connect with other people is even more fundamental, more basic, than our need for food or shelter!

While we often think of cognitive abilities, such as intelligence & problem solving, as residing in our brain, we don’t always give our social abilities the same sort of biological significance or importance. We consider general intelligence to be of the hard-wired “nature” side, relegating the “social” to the softer “nurture” dynamic. But as social is learned, it is cognitive and has its place in a the brain. In fact, social cognition has its very own place in the brain. What’s more, these two types of mental actions, the social cognition and the non-social cognition, each require so much concentration that they are in competition with one another for brain-power. When one form of thinking is happening, utilizing its associated regions, the other brain regions are quiet, inactive. Yet, there is a default; when we are in our free moments, our brains revert to social thinking, reflexively considering our social world. Not just our own feelings, but the thoughts and feelings of others.

Lieberman writes of it this way:

It is the brain’s preferred state of being, one that it returns to literally the second it has a chance.

This hard-wiring to connect and interact with others alone should impart how important being social is to our lives. But there’s more.

Our physical pleasure and social rewards share the same neural network. It’s called the dorsal anterior cingulate cortex (dACC), if you must know! This means that social rewards, such as the approval of others, will activate the opioid system, providing a sense of stress relief and pleasure. In other cases, oxytocin is released in order to move us towards helping others as well as reducing our own general fears.

But since both physical and social rewards share the same neural network, it means that our brains also respond the same way to pain — regardless of whether the pain is social or physical. Our break-ups, friendship losses, etc. are as real as physical pains!

So the flip side of what Harvard reported in that Daily Stat is that without companionship, without our social needs being met, we experience unhappiness. Our need for human social connection makes loss, rejection, and loneliness seriously painful. And not only in the short term; it can lead to anxiety, depression, and other mental and physical illnesses.

There’s no doubt in our minds that a social participation deficit can be equal to a serious pay cut.

While there’s been a lot of discussion about the potential problems with children spending too much time isolated with tech gadgets, there’s, sadly, not been as much of a focus on the affects of adults shunning social interaction for their gadgets. But the good news is that because our brains have specific pathways for social interactions, we can exercise and increase them much like any other intellectual activity or behavior — by having quality social interactions and repeating them often — and increase our happiness along the way.

…I bet you know who would be good for that! *wink*

The Peck & Call Girls: Assisting your brain’s preferred state of being.

(And we’re good for that other head too!)