They say that behind every successful man there is a great woman. While the saying dates back to the 1940s, modern men’s magazines continue to push the connections between a man’s success and his partnerships. With feminism, this notion was often dismissed. That, frankly, was silly. We all become more successful with good partnerships!

Of course, the best partnerships are respectful two-way streets, each partner helping one another to reach for and achieve their goals. However, whether we are single or in happy partnerships, there are times when we must all receive our support, understanding, and assistance from others.

In most cases, we think nothing of this when the help, knowledge, or expertise we seek comes from a source we pay. For example, it is perfectly fine to pay for assistance from medical professionals, career guidance counselors, and financial planners. Yet, when it comes to other vital, and even more intimate services, such as human companionship, healing eroticism, and sexual pleasure there are those who will balk at such transactional arrangments.

Some say payment belittles the connection. Others say that “real men don’t have to pay for it.” Both of these supposed arguments operate off the notion that real sex is something to be earned, not bought. Typically, both of those arguments are also based on the notion of “wooing” a partner. Traditionally, a male suitor will “woo” his intended romantic partner by taking her out to dinner and on dates. During these times, the suitor must make certain to be on time, be polite and respectful, be forthcoming and share honestly, and to listen actively in return — all in pursuit of a real connection. (We like that too!) Or at least the suitor must approach the date with the intention of deciding if this woman is worthy of continuing to seek a connection, i.e.continue to go on more dates.

Generally, the male suitor is expected to pay for these dates. If not in full, then by going dutch. And this is where sex workers and other professionals typically argue that men are, in fact, participating in transactional relationships. For the very act of paying for those date expenses is decidedly the definition of paying for a woman’s time and attention. And what is an engagement ring, a wedding, a marriage, the house with the little white picket fence? Aren’t those too all acts of “paying for it”?

To this, the “real men seek connections” crowds will invariably respond with variations on themes of so-called “real” honor, worth, value, and respect. The root of those arguments lies in the belief that paying for things somehow lessens them; that money is, if not the root of all evil, something which lays deep in the dirt and soils things.

In Pragmatic Capitalism: What Every Investor Needs to Know About Money and Finance, Cullen Roche provides what may be the most succinct definition of money:

Money is simply a social construct that allows for the exchange of goods and services.

Money is an agreed-upon and convenient means of trading. But notions of, and language surrounding, money show it is far more complicated than that.

We pay respects, we pay attention, we pay tribute, we pay compliments… There are even clear distinctions of value based solely upon receipt of payment or the lack thereof. For example, being paid is the literal line separating the amateurs from the professionals!  In many ways, being paid money for work, production, creation — whatever we do — is the greatest compliment of all. 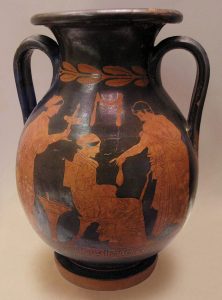 The ancient Greeks had a word — a single word — which seemingly gets down to the roots of all of this.

(Is it not also delicious that timí was also spelled tīmḗ?! Time is also something that has value and is paid. And we know you love to spend time with your Peck & Call Girls!)

Undeniably, the concepts of money and monetary payment carry with them the ideals of honor and value. So how can consent to make a payment, or, for that matter, consenting to accept one, take any of that away?

The answer is it simply doesn’t.

When all parties involved agree to the same value of a service — including a monetary one, it’s all about honor and respect. And it’s all good.

PS When the ignorant begin that “real men” talk, when they preach about “real connections,” like this woman did, we just have to ask how her definition of “investing in a woman” is any different than how gentlemen invest in us and our time… Feel free to discuss with us on Twitter. 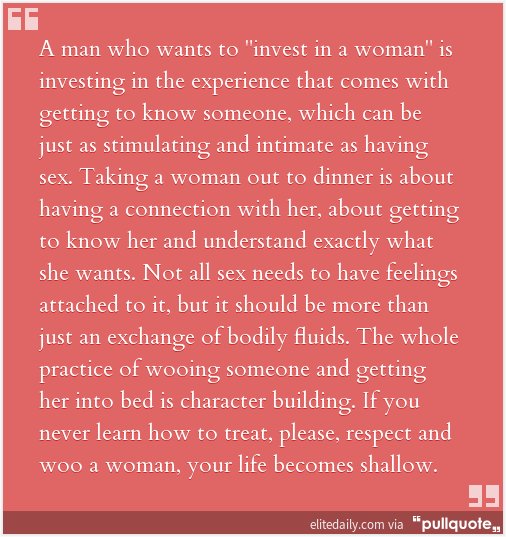